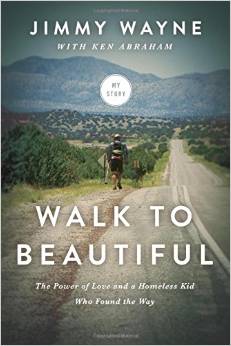 It was May 2013; Eric and I were at the House of Blues enjoying Bubba’s Bash, a charity concert hosted by PGA golfer Bubba Watson. Jimmy Wayne, a country singer, sang a few songs and shared a short testimony of his teenage years. When he was thirteen, his mother and the man she was married to at the time, kicked him out of the car in the middle of the night at a bus stop hundreds of miles from home. Later, as a homeless teenager he asked an elderly couple if they had any work for him to do. This led to him living with them and experiencing stability and love he had never known.

Eric’s reaction to this startling story was “How could a mother ever abandon a child?” Mine was “How could someone overcome such a horrific childhood?”

I left the concert wanting to know more about his story, wondering if he had written an autobiography. Through the power of Google, I checked – nope. Too bad, that would be a fascinating book.

Fast forward to October of this year. Guess what? His autobiography, Walk to Beautiful, was released. Of course I ordered it.

And, yes, indeed, it is a fascinating book. Jimmy Wayne shares vivid details of his grim childhood riddled with constantly moving to different homes, violence, and hunger. His teenage years were spent in and out of foster homes and living on the street.   Until he met Russell and Bea Costner, the elderly couple who took him in. Because of them he graduated high school. Jimmy says of Bea Costner, “She changed every cell in my body.”

He tells of his rise to fame as a country songwriter and singer. He tells of his months long walk from Nashville to Phoenix to raise awareness for foster kids. Walk to Beautiful is an inspirational book that gives a sobering glimpse into what life can be like for foster kids and a call to action for each of us to do what we can to improve their lives and offer hope.

So, why I am doing a review of an autobiography of a foster kid turned country singer on a financial coaching blog?

Well, it is my blog, so I get to write about whatever I want. (She says with an evil laugh, ha, ha, ha.) Seriously though, there are several concepts conveyed in the book that relate well to financial coaching that I felt were worth sharing. Here they are.

Throughout the book Jimmy describes ways he found odd jobs to earn money. His parents didn’t teach him to have a strong work ethic; they didn’t teach him the concept that money comes from work; he had to figure it out on his own. Sometimes, it was the only way he could eat. Certainly, this wasn’t the ideal way to learn these values, but he did learn them.

For parents who want to teach their kids these principles in a more gentle, loving way, the Smart Money Smart Kids book I’ve blogged about previously discusses ways to teach your children the value of hard work and the concept that money comes from work, not mommy and daddy’s wallet.

While reading the book, I discovered that Jimmy Wayne and I are close in age and graduated high school the same year – 1992. So, when he would talk about being a certain age or would give a specific date for some terrible event in his life, I couldn’t help but imagine what I was doing at the same age or date.

This was particularly true for the story of the night he was left at a bus station at age 13 in Pensacola, Florida. I grew up just outside Pensacola. So, while he was sitting lonely, scared, filthy, and hungry outside a bus station in the middle of the night, just a few miles away I was asleep in a warm bed with a full tummy with loving parents in the next room.

I wonder if I woke up happy, contented, and full of gratitude that morning? Probably not. I probably woke up wishing I didn’t have to go to school, bitter that I was not putting on the coolest brand name clothes, and aggravated that my parents never let me do anything fun.

Walk to Beautiful gives parents and kids a valuable perspective and appreciation of the blessings they have. It reminds us parents that our child will be fine if he doesn’t have the latest and greatest of everything. Providing a safe, loving home with food on the table is way more important.

Where are you today?

My favorite line from the book is “It’s not where you’ve been, but it’s where you’re goin’; it’s not who you were in the past, but it’s who you are today – that’s what really matters”.  This is Jimmy Wayne’s beautiful message to kids growing up like he did.   It truly applies to many situations, including our financial lives.

One of the first things we learned at Dave Ramsey’s Financial Counselor Training was the focus in any coaching session should be on where the client is today – what is their income, savings, and debt today – not how did they get to this point. While learning from past mistakes is valuable, dwelling on them and criticizing them is not. Then after assessing where they are today, a coaches job is to convey knowledge and inspiration to get them to where they want to be.

←Book Review: Keep the Happy in Your Holidays
Jumping off the Christmas Merry-Go-Round →